Feel free to share your Celebration III Diorama Workshop experience with us – Good or Bad – Help us make the next ones better with your input. Simply send me an email to DIORAMAWORKSHOP.COM@GMAIL.COM and I will add it to this page. You can also comment at the bottom of the page about the comments 🙂 LOL. I will get the ball started, please Don’t be shy !!!
X

FRANK DIORIO : This was the real test for me, was the success of the Celebration II Diorama Builders just a fluke coincidence ? Or was making dioramas an activity the fans really enjoyed coming to. Well, I guess I don’t have to tell you the answer to that question now do I ? LOL. I Think for me the best part was having Local Montreal friends come and help share the experience with me after telling them what a blast Celebration II was. I was expecting about the same number of people who came to build at CII but was shocked when that number showed up JUST on DAY ONE !!!
.
It was also great to see Jamie Follis again, You may know him as Sillof online, he wasn’t an “official” staff member per say at Celebration II – but had helped me so much with the Cantina and Docking Bay – I was THRILLED that he asked if he could help again at CIII. He has since helped me at EVERY convention since. The insanity of it all !!! LOL
.
I may have been a little disapointed that the final Death Star didn’t align as perfect as I had envisioned ( my perfectionist side of the brain) but it really did turn out great. This could be the easiest of all the convention designs for you to rebuild at home.
.
I gotta thank my TEAM – and I’m doing this in 2013 so my memory – especially after being surrounded by Alzheimers for the past 6 years – isn’t what it used to be so SORRY for the names I have forgotten. If you read this email me. and I’ll give you due credit. Standing … Mr X, Patricia R, Jamie Follis, The Emperor LOL, José G, Mr B, Front row David S, ME Frank Diorio, André B and Eric D. See you in 2 years. Frank

PATRICIA ROY : My first convention was in Indianapolis. I was happy to set foot in the city for the first time. What I remember the most are the days prior to the convention. The setting up! Frank had a huge project for us. We were painting wooden boards that would later be the partitions for our reserved space. We were painting, and painting, and painting. ‘Till the late hours of the evening. Haha! I went to bed that night utterly exhausted. On opening day, we realized we should have pre cut the foamcore. Some very nice young man offered to do it and he cut foamcore nonstop for three days without complaining and strangely, without really talking to anyone. We never knew his name and never saw him again. Sometimes I wonder if he’s cutting foamcore in his basement just for fun.
.
I had no idea what I had gotten myself into. I hadn’t seen the plans for the dioramas so I had no idea what people were supposed to be doing. I gave myself a crash course of the basics and tried my best to help out anyone who needed me. Turns out, I was pretty good at chatting with the folks and helping them have fun at our kiosk. I attended only two events during the convention: the incredible 25 minute play about the original trilogy and the showing of old 70’s and 80’s commercials about Star Wars toys and such.
.
My funniest memory is about our friend Jamie aka Sillof to you guys. I didn’t know him at all but he’s a tall guy, big boned, the kind you wouldn’t want to mess with 🙂  and like most of these guys, a total teddy bear. He cut himself pretty bad one day and we were looking for bandages or anything to stop the bleeding. All I had were ” lady pads” and I wrapped one around his finger. The sight of this big guy with that female product around his finger was the most hilarious thing I had seen and I remember thinking he was reacting pretty well to all this. Other than that, it’s mostly about work and PR for me at conventions. What I like best is talking with people from all over the world. ( Patricia had so much fun she returned to the crew at CV and CVI but that’s another story 🙂

JAMIE FOLLIS aka SILLOF : I remember at C2 just being happy that I had found this awesome room full of stuff I did just on a level exponentially bigger and better than what I had been doing.  I did not know Frank or his site, I was just there helping set up as part of a local fan group. Coming back for C3 it was great to see familiar faces and it was the real start of what keeps me coming back for each celebration.  There is a real sense of family, maybe a dysfunctional family, but a family none the less.  I never imagined I would see workers, the fans, the kids who come back year after year to work.  We have seen kids literally grow up from kids of age 6 or 7  to 20 year olds who come back.
.
For me, other than Patricia’s finger incident ;P it would have to be just the size of the 2nd workshop.  To understand what I mean you have to realize that at the previous celebration we were basically in a glorified conference room with 2 sets of single doors.  Then I come into this cavernous hall expecting a basically similar set up but instead there was this huge area for us.  Frank and everyone were feverously constructing these massive death star wall panels that served as part entry into the workshop, part divider for our area, and part display shelves.  Two of my dioramas were displayed on those shelves and featured on Star Wars.com and I thought I had really made it. We basically built a movie set just for a few days and then I think we just left them there.  I still have the shorts that got ruined with all the splatter of  the death star blue grey paint from all the panels I painted.  It was just the awe inspiring thing that I was proud to be a part of.
.
It also went so much smoother than C2. C2 seemed like we were just kind of making it up as we went.  This time Frank had done so much prep work and was just a huge leap in size, scale, and finished product.  But that is part of what makes these things great, Frank is always pushing to make the workshop bigger and better.

Did you attend (or want to in a future convention) one of our Star Wars Celebration Diorama Builders workshops ? if you have a Facebook account, why not JOIN the OFFICIAL DIORAMA BUILDERS FAN CLUB group today !!
X 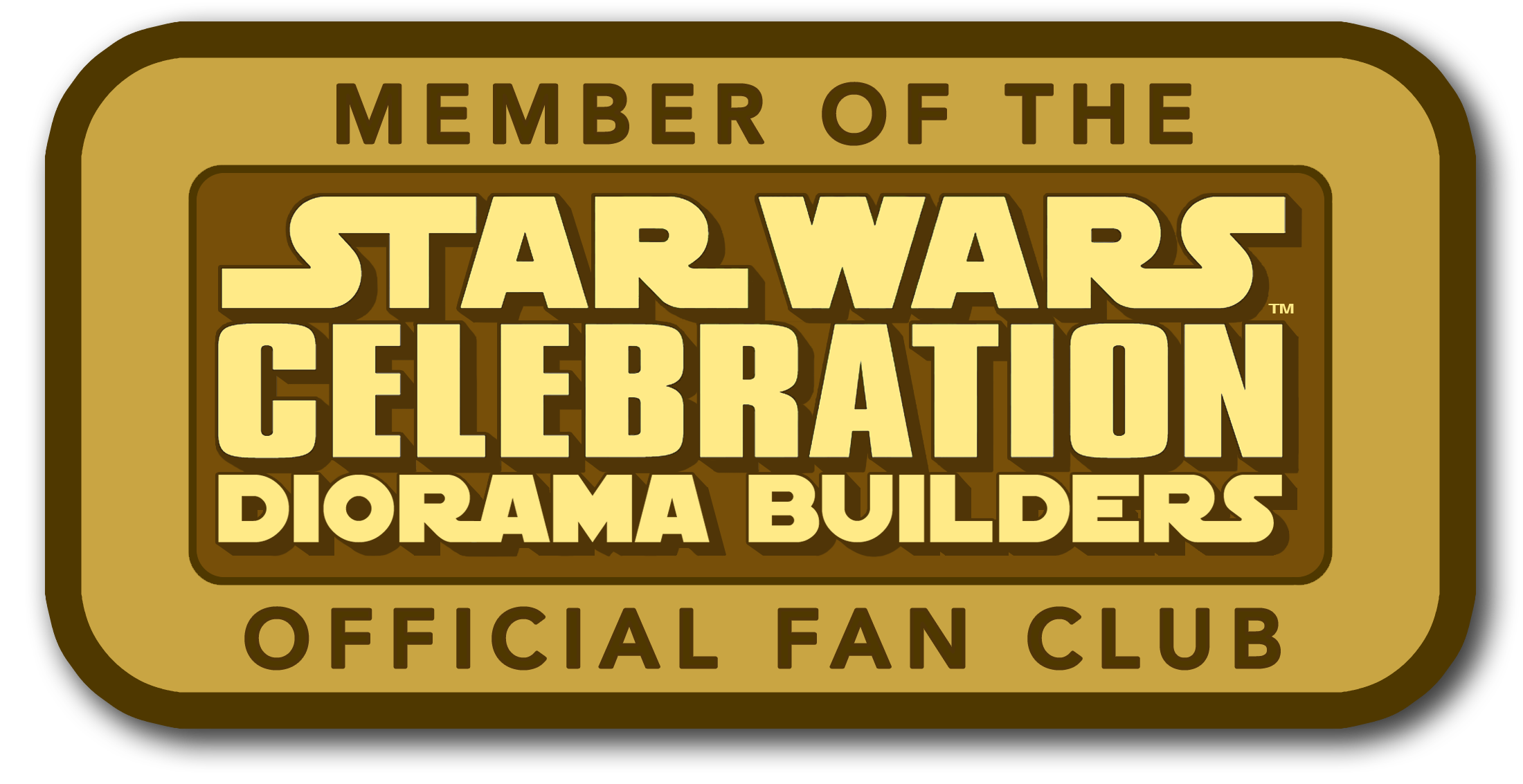 Catch up with fellow visitors and exchange stories, read cool interviews with the crew, exchange photos, fun surprises and grab some FAN ONLY merchandise next year at actual future conventions 🙂
X

IF YOU LIKE WHAT YOU SEE, PLEASE SHARE WITH YOUR FRIENDS
USING THE SOCIAL MEDIA BUTTONS BELOW